I found these old photos, probably from between 1870 and 1890 in Naples, among my Uncle Carlo’s possessions and thought you would enjoy them. A knowledgeable friend interpreted them for me and answered another friend’s questions. He’s quite a Sherlock Holmes!

Besides the streets, which were cleaner then than today (2011), note the clarity of the photos and their candor.  Cameras at that time were bulky, had to be set on a tri-pod and were hardly inconspicuous.  Yet the people for the most part seem unaware of the camera’s presence, giving the photos an exceptional, eye-witness authenticity.

I wonder if your friend can tell from the photos what time of the year each picture comes from.  I know southern Italy is more traditional than in the north which would explain the layers of clothing the women are wearing, but in the same picture there are people in shirt sleeves.  So is it cold or warm? That same picture, the women definitely look like they’re singing. I think so too.

The three old guys leaning against the building look cold, but they’re dressed warmly. And what the hell is the fisher guy doing holding a rope tied to a door?  Is he smoking a pipe? What I also found especially unique, besides the clarity of an 1890s picture (I, too, find the quality quite amazing.  Even the children who were obviously moving are not blurry) , was the candor.  Cameras were bulky, had to be set on a tri-pod and were hardly inconspicuous; yet the people in these pictures are for the most part unaware of its presence.  The photos feel eye-witness authentic. 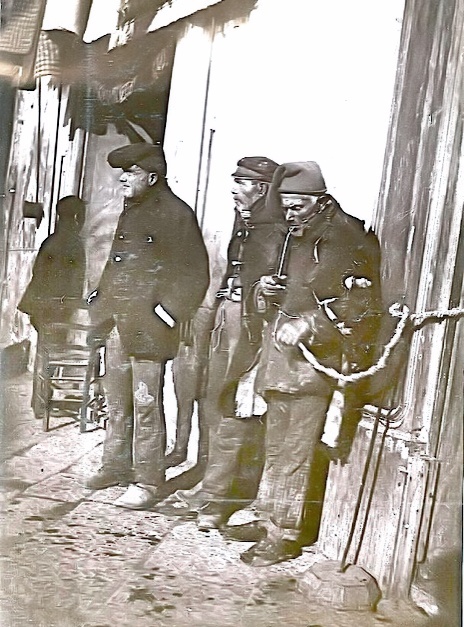 One fantasy: the hands of the pipe smoker (a simple long-stemmed clay pipe, of the kind sold in threes, imported from Holland) and faces of the men leaning against the wall are really black, not tanned, they could be delivering coal, three is a team, which would put us in winter, catching some rays, and if you look closely, you will see that the rope is looped loosely around a thin but weighed metal post… I would say the mule or donkey and its cart are at the other end of the rope. The fishermen wool caps, and seaman’s headgear are just remnants of their past (see the braiding on the sleeves of the one on the left)… Feels colder than the other picture. The sun is higher (see shadow) and if it were summer they could not stand it…. 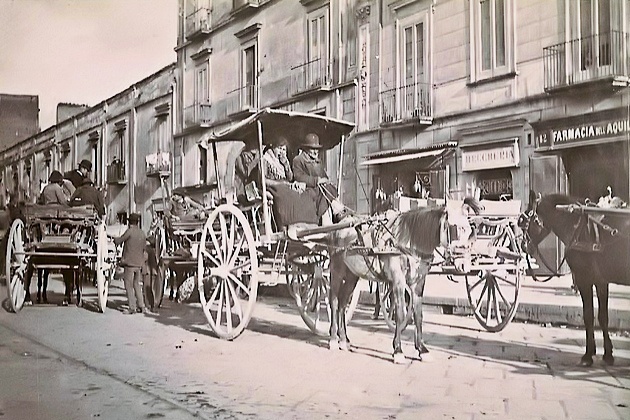 The cart on the left tried to cut back into traffic going the other way.  Note the discussion between the coachman in the back and the man on foot, both with bowler hats, and the trajectory of the collision.  It feels like a cool day, no kids in the street, everyone wrapped in coats, all shutters closed, but the shops are open.  The butcher (beccheria) has extended his business, and the salamis are hanging out.  You could not do that in summer, or you would have to go directly to the Eagle Pharmacy next door!  The woman sitting patiently in the waiting cart is not yawning, but eating something out of a paper wrapping. 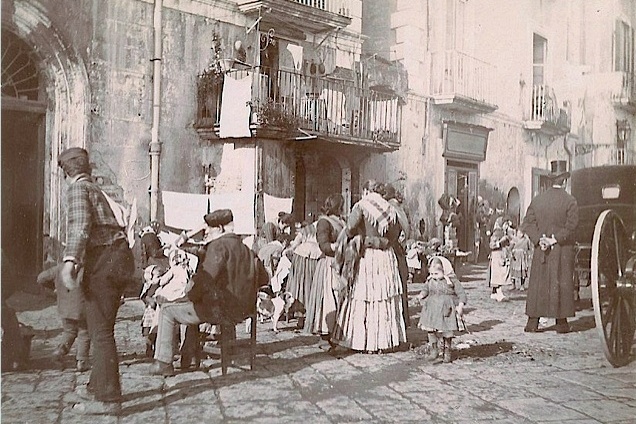 No one is looking at the camera.  Everyone is busy doing his/her own thing – a man in shirt sleeves, a seated Garibaldi-coiffed veteran in the middle of a gaggle of kids well wrapped up, as are the women, who have lighter dresses but still wear two or three shawls on their shoulders.  (These were sometimes used to carry things, tied by knots.)  The man in the redingote and top hat is probably a coachman, not a cop, watching over the shiny cab in front of him, hands clasped behind his back in a typical “at ease” military pose.  There were no police in Naples or in most of Italy before the 1880s.  The Mafia-like Onorata Società (Honoured Society) took care of petty crime and kept peace in the streets.   It still does under three different names today, but now they are also chased by the Carabinieri, who did not have overall urban police duties back then. 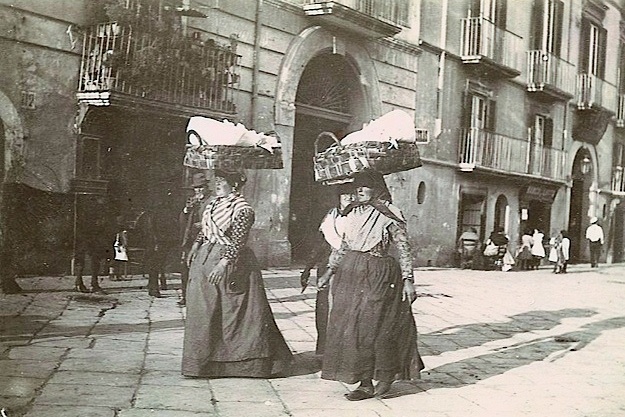 What are the three women selling?  On their heads they are carrying the sort of baskets peasants still use for fruit or fishermen for fish.  It is not clean laundry (not folded).  They may be on their way home from the market (No one is looking or asking them anything, and the baskets are not evenly full.).  They could be advertising their leftover melons and peaches in a repetitive sing-song:  “Belli i miei meloni, freschi, freschi….Pesche, anguria, fresche, fresche.”  People then wave from their balconies and a kid (‘scunizzo in Neapolitan dialect) brings up the produce.

It is mid to late afternoon and hot.  Shutters are open.  The children in the background are dressed lightly.  So is the man walking away next to them.  The plants on the balcony are dense and not spring-like.  The notion of summer clothes was unknown in the poorer classes.  Women always wore everything they owned, or so it seems, summer or winter, and if it were cold, people would not be sitting outside.  Venturing a guess, it could be September, with the sun projecting a very long shadow.  One of the little girls in the background still has her school dress on, and her mother has not told her to go and change yet; so the time is about 5 p.m.

One more remark or two

In picture 1 the men leaning against the wall are 2 veterans and one fisherman. The veterans are from the Garibaldi war (as you can also see in picture 3 the gentlemen sitting on his chair with his back three quarters to us) he is wearing a Garibaldi hat…. So I would date these anytime between 1870 and 1890…. The man in a redingote and top hat may well be a coachman, or a cop…. I will do some research on that… There was no police in Naples or for that matter in most of Italy before the 1880s… A group of people calling themselves „l’onorata societa“ took care of petty crimes and peace in the streets… It still does under three other names today, but they are also now chased by the Carabinieri, who did not have overall urban police duties then….