Mountaineer with a 1939 German expedition to the Himalayas who,
trapped in India by the war, worked as a PoW camp doctor

Dr Ludwig „Lutz“ Chicken was an Anglo-Austrian mountaineer who took part in the 1939 German reconnaissance expedition to Nanga Parbat, at 26,658 feet, the world’s ninth highest mountain.  At  the  outbreak  of the Second World War he was interned with his climbing companions in India,  but decided not to escape with two fellow expedition members, Peter Aufschnaiter and Heinrich Harrer. Instead he remained in captivity and used his skills as a doctor to care for 1,200 fellow  prisoners. His death last September has only just been reported.

The first attempt to climb Nanga Parbat was by the Englishman A. F. Mummery, who disappeared on the peak in 1895. After several attempts in the 1930s by German expeditions – during which 26 mountaineers and porters, some the best of the age, were killed on the nine-mile Rakhiot route – the mountain became known as the German „mountain of fate“. So in 1939 the lightweight reconnaissance expedition led by Aufschnaiter, organised by  the Munich Academic Alpine Club, set off to reconnoitre a three-mile route on the Diamir side of the mountain. The four team members were selected only after a lengthy political struggle with the authorities of the Third Reich.

Early in January 1939, Chicken was in the club’s library looking for a Swiss skiing guidebook when Aufschnaiter, seeking a mountaineering doctor, approached and asked if he wished to join the expedition. Chicken replied: „Don’t joke!“ However, realising the offer was serious, he consulted his parents and after contributing several  hundred  Reichsmarks,  he accepted, recalling, „This decision saved my life as it kept me out of the war.“

On April 6, 1939, the expedition departed for India, with Chicken meeting the other two mountaineers for the first time at Munich railway station en  route to take ship at Antwerp. The others were Hans Lobenhoffer, an officer in a German mountain infantry regiment, and Heinrich Harrer, one of four who had made the first ascent of the North Face of the Eiger in 1936. Two of the other three, Anderl Heckmair and Ludwig Vorg, had been selected to go to Nanga Parbat but had been forbidden by the authorities. 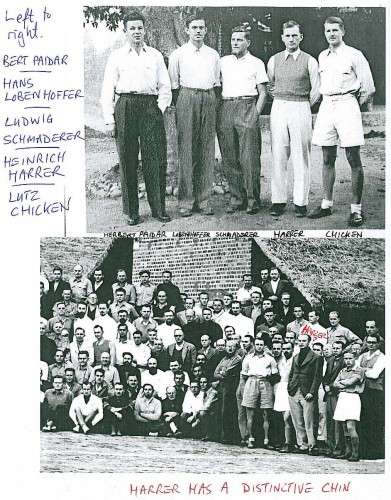 After  24 days, they landed in Bombay where Chicken was greeted . by a cousin living there. He was forced to stay for a week because of an ear  infection and travelled alone through India to rejoin the expedition at base camp. On June 13, Chicken and Lobenhoffer, following Mummery’s 1895 route on the central rib of the Diamir face, found a piece of Mummery’s firewood at 18,045 feet, the only trace of him and his two sherpas ever found.

Colossal avalanches, for which the mountain was notorious, „which crashed down for half a mile like express trains, sweeping over adjoining ridges“, forced the climbers to seek safer routes. At the end of June, with  Lobenhoffer suffering a fever of 104 and fearing for his life, they retreated to base camp for a fortnight. On returning to the mountain, they found it covered in  bare ice  and  Aufschnaiter and Chicken reached 22,370 feet to the „western peak of the Ganolo ridge. At the end of July they decided to examine the technically easier Rakhiot route for comparison. Chicken noted: „It was the most imposing view I ever had – the gigantic amphitheatre of the Nanga with her satellites towering above.“

At the end of August, the group split into pairs, travelling via Astor or Gilgit to meet up at Srinagar where they learnt for the first time of the imminent outbreak of war. They sought passage home on the ship Uhlenfels which, however, had been instructed not to approach India. Unable to find other ships or aircraft, Harrer, Chicken and Lobenhoffer attempted to reach Persia via the Principality of Las Belas, Beluchistan, whose Maharaja, they had been told, was no friend of the British and who might assist.

Their attempt ended abruptly when, after bivouacking, they were arrested for travelling without papers. Chicken recalled: „We were not officially ‚arrested‘ but were involuntarily taken to Karachi. Newspapers stated that aliens leaving main roads were liable to ten years‘ imprisonment. The superintendent of police received us with, „Well gentlemen, you lost your way while hunting, didn’t you?‘ We replied, ‚Yes, sir‘. We were much relieved by his act of kindness.“

Chicken suffered several days of malaria in a military hospital in Delhi, „during which I spent time eyeing up the beautiful nurses“. All four were interned in the Central Internment Camp, Ahmadnagar and their baggage impounded. Although civilians, they were prisoners of war under the Geneva Convention.

In 1941 they were moved to a former army camp at Deolali. „The camp was dreadful; unbearably overcrowded and hot with dusty, poor accommodation; we felt badly treated so we went on hunger strike,“ he recalled. An investigating British officer walked into a melee of prisoners by now intent, on murder and asked, „Gentlemen, whatever is the matter?“ His self-assurance saved his life. 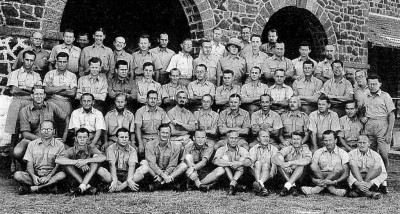 An interned architect was asked to design a purpose-built camp at Dehra Dun. Chicken went to work in its hospital. When asked why he had not escaped with Heinrich Harrer and others, he said: „All attempts had failed; fugitives were caught, or returned of their own volition due to illness or exhaustion. Had I escaped and been“ recaptured I would have been banned from my work as a camp doctor, so I decided not to try and I’d already had enough adventure. We were allowed generous parole outside the camp — I was always the fastest cross-country runner. We were treated very well and had many facilities.“

In contrast, however, some prisoners developed a monomaniacal desire to flee. In the main escape of April 29, 1944, Harrer and Peter Aufschnaiter reached Lhasa in Tibet; Rolf Magener and Heins von Have reached Tokyo; Friedel Sattler and Bruno Treipl gave up and Hans Kopp was recaptured in Nepal. Harrer went on to write Seven Years in Tibet.

Chicken’s passion to heal-the sick was stronger than a desire to escape. „The camp was an international community and as an almost qualified doctor I was able to learn a lot from other very experienced interned surgeons and professors of medicine. I was always busy with general and tropical medicine and successfully submitted my doctoral thesis on the camp’s diseases at Munich University in 1947.“ 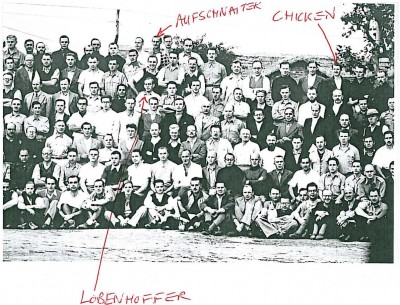 Chicken was repatriated in November 1946. His ship called at Portsmouth where he could only wave from the deck to his cousin Mary, who had travelled from the north to meet him. He went to Munich to complete his studies and was confronted, „by a totally destroyed city; a terrible sight“. He qualified in 1947 and returned home to Bozen, South Tyrol, where in 1948, he established his own general medical practice in nearby Brixen where he remained for the rest of his life.

Ludwig Chicken was born in Klagenfurt, Carinthia, Austria, to an English father and Austrian mother in 1915. His grandfather had moved from Durham to Cheb, Bohemia, where he prospected for new coal mines which were almost all British run. Six weeks after his birth his father moved his family to Bozen. On a visit he had thought it a marvellous place and seeing an advertisement for a bank cashier there, he successfully applied for the post.

In this Alpine region Chicken began a lifelong love of mountains and he attended a German language primary school from 1921 to 1926 which was followed by grammar school where by 1926, following South Tyrol’s annexation by Italy, all schoolteaching was compulsorily in Italian. He recalled: „Intense German nationalism developed and we took to National Socialism, which represented a hope. For us this was cultural opposition to Italian Fascism – despite their political affinities. In spite of our elders‘ mistrust, all the youth became fascinated by the „greater Germany“ facade of National Socialism to the point of mass psychosis. You could not possibly even begin to understand this unless you had lived through it“

Upon completing school, Chicken travelled widely in England and Scotland, visiting relatives, but, deciding not to settle, he moved to Bologna University in 1934 to read medicine. Finding the course devoid of practice, after a year he transferred to Munich. Chicken began to discover negative things about the Nazis which he tried to ignore and he joined the Hitler Youth as a medical helper in youth camps. Although sympathetic, he never became a party member and slowly came to realise that many things were not right under the Third Reich. In the 1950s he became openly and honestly self-critical and confronted his earlier views and transformed his thinking.

In Bozen in 1948, Chicken met Ursula Groth, a British exchange student from Bradford, whose mother was German and whose father exported fine Yorkshire wools to Austrian weavers. They married in June 1950 in her home town and settled in South Tyrol, where, preferring to speak in English over many years, Chicken picked up her Yorkshire accent.

After marriage, he dedicated his long medical career to the area around Brixen. Often, after a long day in his practice, he had to visit patients in remote mountain farms, frequently at night, which led to many pleasant adventures walking among nature. On occasion, he had to transport sick patients by horse and sledge to the nearest road head. He retired from medicine at the age of 81.

Chicken continued to climb, ascending 660 summits in the Alps, Bulgaria, Greenland, Japan and Scotland; he climbed Kilimanjaro and remote peaks of the Hoggar and Tassili in the Sahara.

In 1983 he was drawn again to the Himalayas. He became closely involved in many mountaineering clubs, international foundations and symposiums where he was a charismatic speaker. He promoted the protection of mountain nature and ecological and medical convalescence mountain tourism.

From 1991 to 1993 he was president of the Mountain Protection Commission of the the International Mountaineering and Climbing Federation. He also found time to train medically mountain rescue volunteers.

Chicken described his life in 2003 in his autobiography Durchs Jahrhundert. Mein Leben als Arzt und Bergsteiger (Through the Century as Doctor and Mountaineer). His wife predeceased him by several months. He is survived by a son and a daughter. 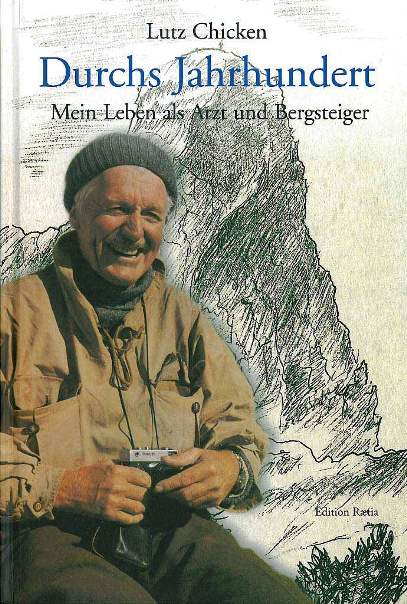