The Process of Analogous Thinking and Learning

The purpose of this study was to investigate empirically if and how learning processes in the basic domain of an analogy would differ from those in the target domain. We used a water model for learning electricity. The learning processes of individual students (16 to 17 years old) in the water and electricity domain were video documented, transcribed and analysed in detail. Sequences with analogous learning tasks were chosen. From these sequences students’ ideas were constructed with interpretative methods, then the complexity of the ideas was determined. The complexity of successive ideas is plotted against time. The course of these graphs for the water domain and the electricity domain show characteristic differences, but the hypothesis, that analogous learning is a top down process has to be modified.

Analogies play a significant role in science instruction. They initiate new theories in science, they are helpful in teaching for conceptual change and they help understanding new concepts in science (Brown & Clement 1989, Duit & Glynn 1992, Treagust 1998). We developed an instruction unit in elementary electricity on the basis of a water analogy (Schwedes & Dudeck 1996). In this sequence of instruction students have to learn the physics of the water model at first and then they hopefully use the water model for explaining electric circuits. We wanted to know if the learning processes in the water domain would differ from that in the electric domain, when students use analogous reasoning.

In the Institute of Physics Didactics in Bremen we have investigated the dynamics of situated cognition and learning in classroom situations for more than ten years and have developed a theoretical approach which allows to describe in detail individual processes of situated cognition and learning in physics learning environments. On the basis of a constructivist epistemology, not using the approach of symbolic representation, individual actions and interactions in authentic learning environments were analyzed. Every student continuously creates cognitions on the basis of his own actions and perceptions. The observer can deduce the students cognitive processes only from the students actions and verbal or non-verbal contributions. These reconstructed cognitions we call „ideas“. These ideas can be qualified by levels of complexity. Looking at the succession of „ideas“ a bottom up development always becomes visible with regard to their complexity. Learning within specific domains can be determined empirically by a slow increase of the average complexity of ideas.

For analogous reasoning on the other hand Gentner and her Group have developed the structure mapping theory, which predicts a top down process of cognitive constructions. It suggests that analogous thinking mainly compares structures in both areas and that some cognitive elements which are not yet represented in the target domain can be transferred from the basic to the target domain. The gain of analogous reasoning lies in the systematicity principle which means, that transfer begins with relations of the highest order and the others of lower order follow nearly automatically. Therefore analogous thinking should be a top down process beginning with the construction of general rules followed by more specific relations and down to attributes and statements on objects [The compatibility of Gentners information theory background with our constructivistic paradigm is discussed somewhere else. Paatz, R. 2002].

An analogy oriented instruction sequence using a water model was taught in a 10th grade class of a gymnasium for 20 lessons à 90 minutes (Dudeck 1997). Two groups of four students each were videotaped over the whole time. Learning sequences covering the same structural content for water or electrical circuits were transcribed and analyzed. From the verbal and non verbal interactions of the students with each other or with the lab work materials students’ cognitions are identified, and reconstructed as students ideas. The sequence of a student’s developing ideas describes his learning process. Ideas are then qualified by their level of complexity (Aufschnaiter & Welzel, 1999) . Corresponding learning sequences in the water and electricity domain are then compared. Additionally pre- and post-tests for the water unit and the electric unit were administered.

For using Gentner’s structure mapping theory we constructed propositional networks at different stages of students learning process. Coded are entities (objects or constants), predicates and functions. Predicates may have one or two arguments, those with one argument are called Attributes those with two arguments are called relations. Functions differ from predicates in so far as they attach to the arguments (number)values. Entities, predicates and functions are further characterized by ranks, entities get the rank 0 , attributes the rank 1 , relations normally get the rank 2 or a higher one. Students ideas are then formulated as propositions and the propositional networks are constructed.

Students had no problem in using the water analogy and using it correctly.

In the basic domain the average complexity of students „ideas“ increases slowly as expected, but in the target domain we find some sort of a valley for the course of the ideas’ complexity. A learning sequence (solving a task or problem) starts with an idea of high complexity (normally a hypothesis for the result of an experiment or the result of a problem to solve) an then falls down in a few or only one step to the bottom of the valley and increases in a relatively short range of time to the level of complexity of the original hypothesis. The ideas which belong to the phase of increase in complexity belong to the process of verifying the hypothesis from the beginning. 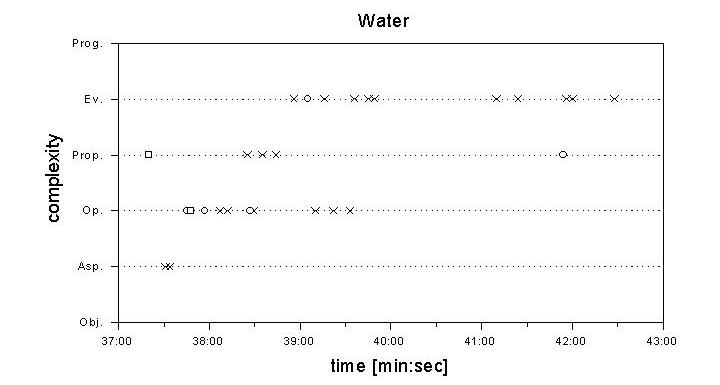 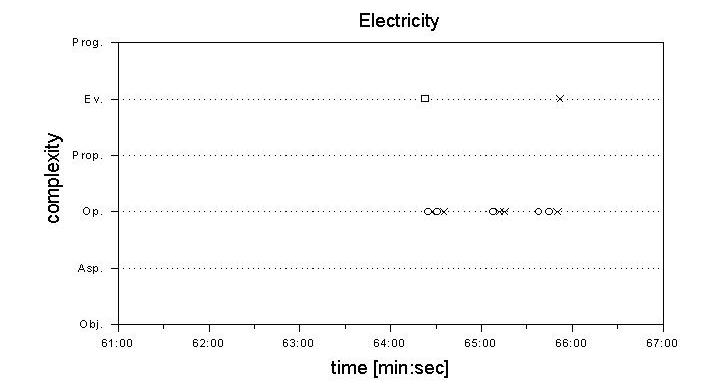 Figure 1: Determining current intensity in a water or electric circuit with parallel branches

So the hypothesis, that analogous thinking or learning is a top down process has to be modified.

For checking the structure mapping theory of Gentner et al we looked for the sub processes, they had identified for the process of generating and using analogies.

Essential for the generation of the hypothetical basic-target relation is the principle of systematicity, which means that high order relations, which are on the top of a hierarchy, are taken more preferably than isolated predicates as shape or color of objects.

The analysis of the learning sequences in the target domain is in accord with sub process four. The observed cognitive constructions of the students showed a high level of complexity and represented therefore high ranking relations and corresponded with the inferential hypotheses.

Looking for the other sub processes we constructed from the answers in the end test for the water domain the propositional network of the student. It resembled nearly perfectly the network of an expert, nearly all the relations and functions of the various ranks were represented as the teaching device intended. We then constructed a propositional network after the first lesson were students were asked to compare the water and electric domain. The graphing of the student’s ideas in a propositional network showed the second process of postulating local matches. Potential correspondences for objects or relations of various rank were stated but without a recognizable systematology (see fig.2). In the next lesson we can see global matches, which we could derive from the homework of the student. 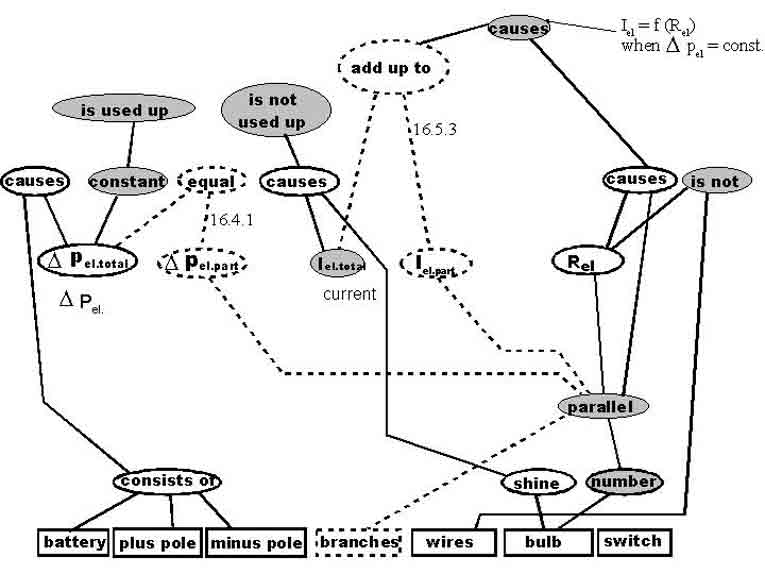 During the phase of local matches students used the words pressure difference and current as is indicated under the corresponding ellipses. They were stated more precisely in the phase of global matches. The numbers refer to the ideas which were identified as C.I.